Home » Newsletter » Don’t have time? Do one of these…

Don’t have time? Do one of these…

What we remember from our youth is fascinating. One thing I recall my father telling me was “You always have a choice”. I believe this to be true and just like back then, sometimes I’m not always thrilled with the choices.

How you respond to that dreaded feeling of not having enough time, is also a choice. I can’t tell you how many times someone I’m working with has told me, “I had to do , I didn’t have any other choice!” I’m sure it felt as though they didn’t have a choice; however, in reality, they did have a choice. They may not have realized they had a choice and/or they might not have liked the choices. Here are a few of the possible choices that apply to most time constrained situations:

+ Just Do It
Doing the task themselves seems to be a very popular choice. A person will see something that “has to be done” and they just do it. Unfortunately, sometimes just doing it right then is not the best use of their time and energy at that time. For instance, this project may not have been the highest priority item on their to-do list. Now they have created an even more time strained situation because they have postponed addressing their top priority item(s).

Another possible reason they did this task themselves was because it was easy to do. In these cases, their time may be better spent focused on a high priority item (that needs their expertise), instead of ticking off an easy-to-do task (please see below for information about delegation, which may be a better choice in this instance).

+ Put It Off
Not doing this project immediately may be the best strategy for certain things. For example, this task is not the most important/highest priority item on your to-do list. In this case, it makes sense to put it aside and focus on the priority item(s). Be sure to have some way this task doesn’t get lost and fall off your radar completely (e.g., keep it on your to-do list, set a reminder to re-evaluate it in the future).

A word of caution when you put a task off – be certain you are not just avoiding it. If the project is something you want/need to get done, and it feels too complicated, difficult, etc. you may be putting it off because of these things. In this instance, don’t put it off. Take a few minutes to figure out one simple step you can take to move this project forward then take that step. Repeat this process until it’s done.

+ Let It Go
Everything on our to-do list has a shelf life. If you’re like me, you have some items that have been on your list for a VERY long time. Instead of just putting off of an item AGAIN, take a minute to decide if it is still something that deserves space on your to-do list. Sometimes letting go can be a liberating option.

+ Delegate It
Nobody in the world will do a task exactly like you do it! That’s a true statement. And, you only have so many hours in the day to be as productive as you can be. If there is something you really don’t like doing (e.g., your payroll, writing articles), figure out a way to delegate it. Initially, this sometimes can be a challenging process and in the long run, delegating this item will be worth it. You will have more time to focus on what you do best AND you won’t be dragged down by having to do something you don’t like to do, which will enable to you to be more successful!

Another benefit of delegating is you are giving someone else an opportunity to shine. Although they may not do it exactly like you do it, they may actually come up with a better way to complete the task. Additionally, you may be giving the other person the chance to learn and grow, which may allow you to delegate even more to them in the future.

The choice about what you do when you’re short on time can become an easy decision (after a little practice), which can also have a number of benefits for others as well as for you! 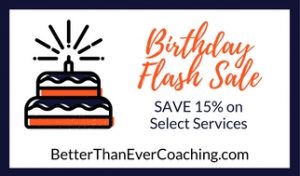